Although, all the reviews are done in an informal way just following a few common steps, such as : same cameras, same 3-4 lenses, same scanner same scanning process, not expired film. I also wanted to bring a more “scientific” comparison since different periods of the year, distinct times of the day or just different weather can make the film vary a lot, even using the same kind of film. So I opted to download* and print this watercolor mixing chart:

In the chart we will be able to see the influence of the film on the different colors. I will select a red, yellow, green and blue as a guideline, these ones here:

After that, I will run an algorithm on GIMP  called sample average color, that will give us something like this:

It will give us the amount of red green and blue on each selected “square” plus a sample of the average color.

The room will be always in the same light conditions, a couple of indirect 5500K lightbulbs  and the camera is shot in a tripod with a Nikon 50mm f1.8D. Generally it will be take in between f5.6-f11 with different shutter speeds. Trusting the light meter in the camera (Nikon F100 and a Nikon FM). 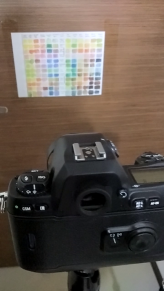 *Thanks to the Flickr profile “Denn” for posting  different watercolor mixing charts with an open Creative Commons license, it really matched the aesthetics of this small project.

7 thoughts on “How do I measure the colors?”